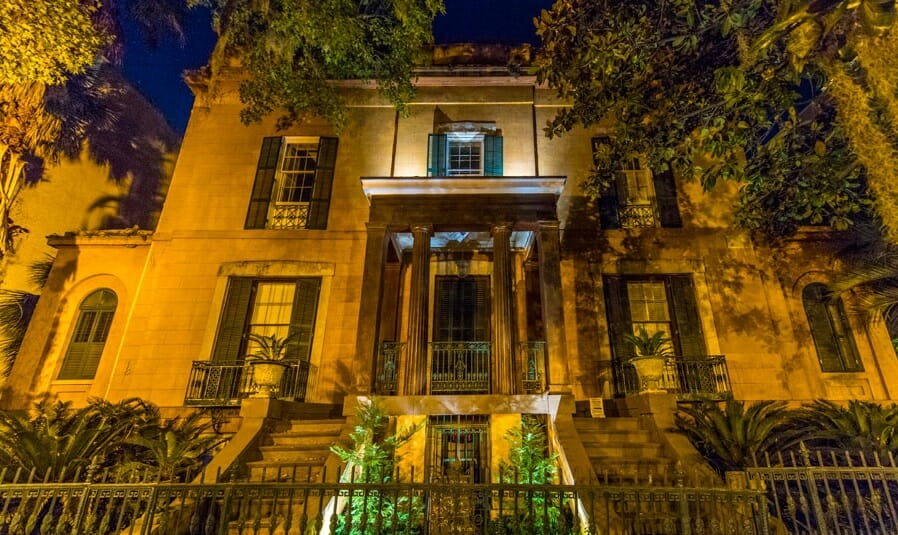 Ghosts? Who’s afraid of ghosts? I mean, personally, I like to think they aren’t real – right? But then I hear a story that might have just a hint of plausibility to it, making those tiny nerve-wracking hairs stand up on the back of my neck and my assuredness takes a nosedive. You, too?

Whether you believe in ghosts or not, when you stay in Savannah, you’re highly likely to hear myriad ghost stories that will have your heart beating just a wee bit faster. It is a historic city after all – frequently cited as one of America’s most haunted cities – and with that history comes an interesting past filled with all sorts of twists and turns, and paranormal happenings. If you can push past your scaredy-cat phase, it can be extremely intriguing. So whatdoyasay we hold hands through this one and read some of Savannah’s most haunted stories together?

Let’s just start with one that gets me every time: the Sorrel-Weed House. From the outside, this home, on the edge of Madison Square in downtown Savannah, is stunning. A towering example of Greek revival style, it dates back to 1841 and was built for its original owner, Frances Sorrel, and later served as home to his son, Moxley Sorrel. Moxley is regarded as a Civil War hero and the youngest general officer in the Confederate army (Robert E. Lee even visited the home in 1861). But what about the ghosts? Well, after Frances’ first wife passed away, he married her younger sister, Matilda (that’s not even the strange part). Frances was also reported to have an ongoing affair with a young slave girl named Molly and even arranged for her to have special quarters set up above the carriage house. For Frances, things were hunky-dory until Matilda found out. Matilda was so distraught that she leapt to her death from the house’s second story balcony. Weeks after that, Molly was found hanging from a noose in the carriage house in an apparent suicide.

Ready for a few twists and turns? In 1859, Frances sold the Sorrel-Weed House and moved next door to 12 West Harris Street – a full nine months before Matilda’s suicide, which makes it impossible for it to have occurred at the Sorrel-Weed House. Yet to this day, there continues to be an abundance of paranormal activity at the Sorrel-Weed House. Visitors have reported a sensation of nausea or choking as they tour the home and others, who enter with a full charge on their phones, leave with no charge at all. Could it be that Matilda longs for the “good ol’ days” at the family mansion before her world fell apart? Or could it be that this home just so happens to be where the Siege of Savannah, the American Revolution’s bloodiest hour, was fought in October 1779 and left more than 1,000 dead?

Whatever story you choose to believe, you can experience all the haunted sensations for yourself by touring the historic home. There’s even an After Hours Paranormal Lock-In for the truly brave (and slightly crazy) among us. Whew! Okay, we made it through that one. Now let’s grab a bite to eat – with a side of ghostly encounters. 17Hundred90 Inn & Restaurant is a time-honored Savannah favorite known for exceptional food and service as well as at least three ghosts who are widely believed to reside at the inn. If you want an up-close-and-terrifying look at this phenomenon, then book room 204 for your stay. Guests of this famed room have reported the feeling of a nudge, bed covers being moved, and even jewelry and clothes mysteriously relocating from one spot to another.

Who’s behind all of this? Her name is Anna. So the story goes, Anna was in the midst of an arranged marriage when she fell in love with a sailor. Caught in a forced love triangle, Anna threw herself to her own death from a third-floor window when her love left for sea (or, some say, her angry husband-to-be pushed her).

But I mentioned three ghosts, so who are the other two? There’s also Thaddeus, a friendly boy who leaves shiny pennies lying on the tables, bar and desk. For those who work in the kitchen at 17Hundred90, the third ghost is not so friendly and has been known to throw around pots and pans and even a spice jar or two at kitchen workers. Ready to see for yourself? Then pay a visit! There’s nothing like a cold brew to settle your nerves, right? Then you should definitely make your way over to Moon River Brewing Company on Bay Street. Oh, and while you’re there, avoid the basement and upper floors. Why? Because Moon River is located in one of Savannah’s oldest and most haunted buildings. The Travel Channel’s Ghost Adventures as well as Ghost Hunters on the SyFy Channel have both visited and documented paranormal activity at the brewery and restaurant. But the staff of Moon River didn’t need the experts to confirm what they have experienced themselves: bottles being thrown inexplicably, people being touched, pushed and slapped by unseen beings, and then there’s the glowing white apparition who occupies the upper floors. During renovations of those floors in the 1990s, the foreman’s wife was pushed down the stairs by an aggressive force (and the foreman turned in his resignation the same day). Who are these ghosts and why are they so mad? The building was originally built as the City Hotel in 1821 and often drew in customers from the “Yankee North.” This being the Civil War era, locals weren’t always so welcoming and the violence that resulted caused the hotel to close down in 1864. The building, much like the city, was spared by General William Sherman’s march to the sea but was not revitalized until Moon River came along more than 100 years later. Apparently, that’s a whole lotta time to hold a grudge and those who were wronged so long ago are now unleashing more than a century of rage upon folks who dare to visit the building’s off-limits areas.

We made it! See, that wasn’t so bad! Then again, this is more of a ‘virtual’ tour’ of sorts. If you add in the darkness of night, an ominous narrative voice, and the slightest creaking door sound – I’m outta here. But until then, now you know how to make the most of your haunted stay in Savannah. Scare ya later!